In an earlier report, AirAsia flight traveling from Indonesia to Singapore has lost contact with air traffic control with 162 people on board.

Flight MH370 got lost on a flight from Kuala Lumpur to Beijing in March with 239 passengers and crew, and MH17 was shot down over Ukraine in July, killing all 298 on board.

The missing jet had requested a “deviation” from the flight path due to bad weather, the company said.

The flight from Surabaya Indonesia to Singapore is a two-hour flight, however the air route was experiencing ‘severe bad weather’ with heavy thunderstorms.

PM @NajibRazak on #AirAsia #QZ8501: "I don't have much details yet, but big possibility that a tragedy has occurred.“ pic.twitter.com/YKV61DZAAL

AirAsia has confirmed in a statement that the plane has gone missing.

#Update Indonesia's authorities: there is no possibility for missing flight #QZ8501 to continue flying. Only had fuel for 4.5hrs.

Meanwhile, Jakarta Post reported, AirAsia flight QZ8501 from Surabaya to Singapore may have crashed at the location 03.22.46 South and 108.50.07 East, in waters around 80-100 nautical miles from Belitung, a National Search and Rescue Agency (Basarnas) official has said.

Basarnas Pangkalpinang spokesperson Supriandi said, as reported by Antara news agency on Sunday, that it had dispatched a rescue team to Belitung.

It is believed that the Airbus A320 had circled over the sea near Belitung to avoid a storm before it experienced severe turbulence and crashed into the ocean. QZ8502 is reported to have had 155 passengers on board, 16 of which were children.

Just spoke to Indonesian Defence Minister Ryamizard Ryacudu. Offered our thoughts and prayers for passengers and crew of Air Asia flight QZ8501. I told him that our SAF planes and ships were already on standby. If he needed their services or any other assistance, the SAF is ready to help. DM Ryamizard thanked me for Singapore’s concern.

The aircraft involved is an Airbus A320-216 registered as PK-AXC. 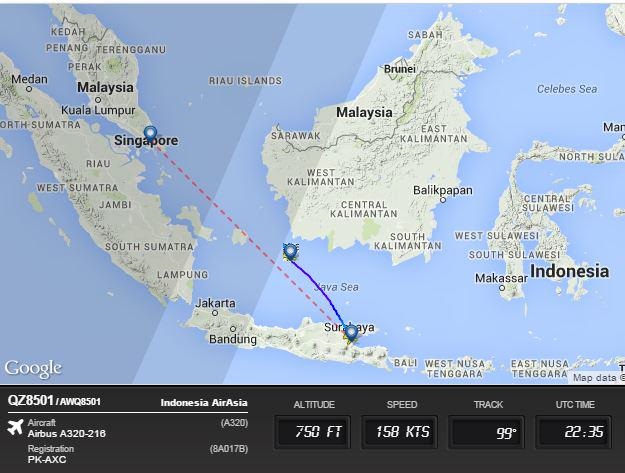 Get the best viral stories straight into your inbox!

#TDSPH
Back to Top
Close